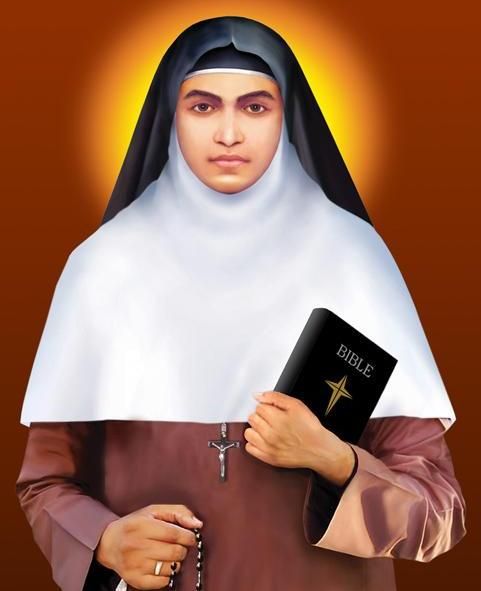 St Alphonsa was a paragon of all Christian virtues. A paradigmatic exemplar of kenotic suffering and supreme forbearance, she had heard the persistent call of Jesus even in her noughties and striven soulfully to interiorize it with the entire moral and spiritual force at her command. Her Christian way was the way to Calvary, the way of the cross. Hers was the via dolorosa - not roses, roses, but crosses, crosses all the way. An abiding faith in the mysterious manifestations of  Providence, an  abounding   hope    that     all  her  angst and  anguish would not be in vain and  a  selfless   love   for   all  distraught souls   around   informed her life.

Here was a nun who sacrificed our mundane notions of peace. She knew Christ brings us not peace, but the sword. We know only the peace that the world gives. But it is not true peace. The way to true peace, the peace that passeth all understanding, is spiritual war. Alphonsa fought her good fight with all her might. She  ran  the  relentless  race.  She won  the  everlasting  prize. Her  life teaches  that we  will  fail to find peace, if we  reject  Christ  too, while  rejecting  our miseries. For  he loves  in  us  not our  human  glory  but our  ignominy and  ignobility.

Anna, Annakutty, was born on 19 August 1910, the fourth and the last child of Joseph and Mary Muttathupadathu, Kudamalloor parish, Kottayam, Kerala, South India.  She was  baptized  Anna  at  the parish  on  the  27th of  the same month.  She lost her mother, when she was only three months old. The motherless little child was now committed to the care of  the  maternal aunt Anna Muricken, who took  it  to  her  husband’s place at  Muttuchira.

Various physical afflictions were visited upon Anna, when she was three years of age. Thereupon the ailing little one was brought back to her father’s house. A famous practitioner of an indigenous system of medicine, the father tended her tenderly. Soon she was in fine fettle again.

Anna joined the Arpookara Government School on 16 May 1916.She had her first reception of the Eucharist on 27 November 1917. While into her fourth class, she found herself again in aunt Anna’s home where she could prosecute her studies more comfortably. At the critical age of  13, the  smart youngster breezed out from the  seventh class in flying colours. The affectionate aunt spared no efforts to instill in her niece all the qualities of  head and heart. Thus Anna grew in age and wisdom, and all divine graces were upon her. Beautiful, graceful, godly and pious, Anna was the cynosure of all the neighboring eyes. No wonder, many a handsome youth sought her hand in marriage. But  the  girl  was  indifferent,  for  God  had  different plans for her.

Even  as  a little  girl  Anna  longed   to  be  made  a  handmaid  of  the Lord. But the solicitous aunt wanted to marry her off  to a man of means and noble lineage. A date for the betrothal was settled upon. The fiancée to be was totally bewildered. A strange idea now crossed her innocent mind. In order to thwart the betrothal, the  shy girl  would  put her  feet  slyly in the dying embers of  the stove at the back of the house and get  them singed. The attempt proved disastrous and  at  the same time providential. Anna had a nasty fall into the fire, sustaining severe burns on the feet. Subsequently, the engagement was abandoned,  and  she  was allowed to set out on  her monastic and mystic journey.

Anna joined the Franciscan Clarist Congregation, a religious congregation of the Third Order of St. Francis Assisi, and through them, completed her schooling. Anna arrived at the Clarist convent at Bharananganam, Kottayam district, on Pentecost Sunday 1927. She received the postulant’s veil on 2 August 1928 and took the name Alphonsa of the Immaculate Conception in honor of St. Alphonsus Ligouri, whose feast day it was. In May 1929 Sister Alphonsa was assigned to teach at Malayalam High School at Vazhappally. Her foster mother died in 1930. She resumed her studies at Changanacherry, while working as a temporary teacher at a school at Vakakkad. Having completed  her higher studies, she received  the habit on 19  May 1930 and on the same day Alphonsa entered the novitiate of the congregation at Bharananganam. On 11 August 1931, she completed the novitiate, took her first vows and became a religious in the Catholic Church. She  was  a  teacher  at  the Vakakkad School during the scholastic  year  1932-33. Alphonsa  made the  perpetual vows  on 12  August  1936.  Beloved  of  God  and of man,  the young sister wondered whether she merited it at all.

Alphonsa was tormented by physical afflictions and tortured by spiritual conflicts all through her silent journey. She suffered them with dignity and serenity. Inspired with all the charisms of the Holy Spirit and overwhelmed by showers of grace, fervently did she beseech God to sanctify herself and others in the swelter fire of her agonies and tribulations. Alphonsa’s life was verily an oblation of love at the altar of self-abnegation.

It was 28 July 1946. The monsoon was raging in full fury. Alphonsa’s condition worsened. The praying sisters ringed the dying patient tearfully. A beatific smile wreathed Alphonsa’s cherubic face. She received viaticum. The names of Jesus, Mary and Joseph heaved heavenward from her heavy heart. In a  trice  she  was  off  on  the  wings of grace to win her prize in an odor of sanctity. Alphonsa was proclaimed ‘Servant of  God’ on  2  December 1953 and ‘Venerable’ on  9  November  1984.  John  Paul  II, the  first  Pope  to steer   Peter’s  bark  close  to  Kerala’s  beauteous  shores, beatified  her  in the presence of  a large concourse of  humanity at Kottayam on 8 February 1986. As the melodious chants  from  the  lips of thousands of fervent devotees who included nuns, oblates, priests, prelates, delegates and lay people from India wafted through the autumnal air in the Vatican, Pope Benedict XVI canonized Alphonsa  on  12  October  2008.  It  indeed was a  defining  moment  in  the  two  millennia  old history  of  Indian Catholicism as she was the  first indigenous Indian ever to figure in Catholic hagiography.

St Alphonsa was born as Anna Muttathupadathu in a Syro-Malabar Nasrani family to Joseph Muttathupadathil and Mary Puthukari in Kudamalloor, near Kottayam, on 19 August 1910 She was baptised on 27 August. Alphonsamma, as she was locally known, was born in Arpookara, a village in the princely state of Travancore within Kerala, India. This lies within the Archdiocese of Changanassery.

Her parents nicknamed her Annakkutty (little Anna). She had a difficult childhood and experienced loss and suffering early on in life. Anna's mother died when she was young, so her maternal aunt raised her. Hagiographies describe her early life as one of suffering at the hands of her stern foster mother and the teasing of school children. Anna was educated by her great-uncle, Father Joseph Muttathupadathu. When Anna was three-years-old, she contracted eczema and suffered for over a year.

In 1916, Anna started school in Arpookara. She received her First Communion on 27 November 1917. When the first school cycle ended in 1920, the time had come to transfer to Muttuchira, to the house of her aunt Anna Muricken, to whom her mother, before she died, had entrusted her as her adoptive mother. She was raised in the Muricken family, which was an ancient and prominent family. Anna received many marriage proposals from reputed families. During Saint Alphonsa's childhood, her grandmother tells her stories of saints, teach prayers and christian songs. However, she had a feeling in her mind that she wants to be a bride of God and do good things for people. During that period Thérèse of Lisieux appeared and told her that she will become a saint. There are many similarities in the lives of Anna and Thérèse, and she was Anna's all-time favorite person and role model.

Anna sacrificed her material fortune and wanted to dedicate her life to Jesus Christ. In 1923, Anna's feet were burnt when she fell into a pit of burning chaff; local hagiographies describe this as a self-inflicted injury in order to avoid her foster mother's attempt to arrange a marriage for her and thereby to fulfill her desire for becoming a religious sister instead. This accident left her partially disabled for the rest of her life. 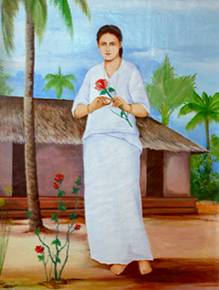